Attack of the New B Movies: Essays on SYFY Original Films (2022) 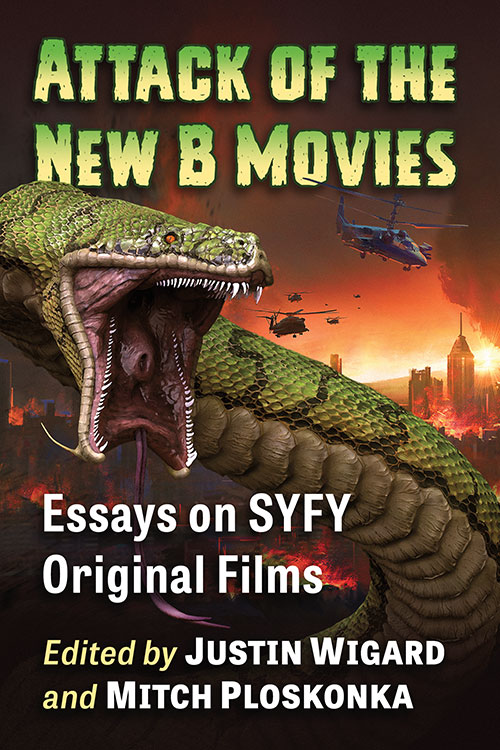 Since its inception in 1992, the Sci-Fi Channel (later rebranded as Syfy) has aired more than 500 network-produced or commissioned films. Campy and prolific, the network churned out one low-budget film after another, finally finding its zenith in the 2013 release of Sharknado. With unpretentious charm and a hearty helping of commodified nostalgia, the Sharknado franchise briefly ruled the cultural consciousness and temporarily transformed Syfy’s original films from cult fringe to appointment television. Naturally, the network followed up with a steady stream of sequels and spin-offs, including Lavalantula and its sequel, 2 Lava 2 Lantula!

This collection of essays is the first to devote critical attention to Syfy’s original film canon, both pre- and post-Sharknado. In addition to unpacking the cultural, historical and critical underpinnings of the monsters at the heart of Syfy’s classic creature features, the contributors offer a variety of approaches to understanding and interrogating these films within the broader contexts of ecocriticism, monster theory, post-9/11 criticism and neocolonialism. Providing a further entry point for future scholarship, an appendix details a thorough filmography of Syfy’s original films from 1992 to 2020.

Throughout Calvin and Hobbes’ 10-year-run from 1985-1995, creator Bill Watterson gave a few dozen interviews, interacted with fans, even was invited to give a keynote at Kenyon College in 1990. After the comic strip ended Watterson famously left the comic industry, shifted artistic interests from commercial comics to landscape painting at home, and effectively retired at the height of popular for Calvin and Hobbes. To date, Watterson’s writings are understudied; publicly lauded and notable, but understudied. Moreover, what correspondences, interviews, and speeches do exist are haphazardly published and uncollected. Taken together with later interviews and in the context of his earlier writings, a nuanced sketch of the creator emerges, one who emerged to write about a book on a comics hero that moved him, who saw something significant enough in Campanelli to speak with a reporter working in Watterson’s own hometown stomping grounds.

This book builds a catalogue of Bill Watterson’s conversations in order to shed light on the life and work of a landmark comics creator whose seminal literary contribution not only still holds significance, but seems to gain more importance over time. The collection begins with a chronology of Watterson’s life and offer a critical introduction into the creator’s work with a particular eye towards his public writings. More importantly, this collection includes archival photographs of Watterson’s correspondences with fans – some of which include original art – along with key speeches, interviews, and Watterson’s own writings.

“From the Classroom: Critical-Making with Comics in ENG 325 at Michigan State University.” Written with MSU ENG 325 students Zaria Cannon and Claudia Kramer. Accepted in ImageText, forthcoming 2022.

“Unfurling the Disciplines: Comics-Making Pedagogy as a Bridge Between the Sciences and the Humanities.” Written with Megan Halpern. In Unfurling Unflattening, edited by Amanda Latz and Janine Utell, MIT Press, 2024.

“Ludic Dissertations: Level 101 and Video Games as Playable Scholarship.” In Historiographies of Game Studies: What It Has Been, What It Could Be, edited by Alisha Karabinus, Carly Kocurek, Cody Mejeur, and Emma Vossen. Forthcoming, Punctum Press, 2023.

“From Comic to Cartoon to Capcom: Ludic Afterlives of Animated Mutants.” In Futures of Cartoons Past: The Cultural Politics of X-Men: The Animated Series, edited by Nicholas Miller, Margaret Galvan, and Jeremy Carnes. Forthcoming, University Press of Mississippi, 2023.

“Minecraft and Worldbuilding.” In Pop Culture for Beginners, Broadview Press. 2021.

“‘Pull Up Your Big-Girl Pants, and Own Your Power’: Feminist Anger and the Working Woman in The CW’s Supergirl.” In Girl of Steel: Essays on Television’s Supergirl and FourthWave Feminism, McFarland Press. 2020.

“‘Evil Witch! I’m Not Scared!’: Monstrous Visualizations of the Other Mother in Multimodal Adaptations of Neil Gaiman’s Coraline.” In The Artistry of Neil Gaiman: Finding Light in the Shadows, University Press of Mississippi. 2019.

“Is That Real or Is It Just In My Head?” “Both”: Chronotopal Representations of Patriarchal Villainy and the Feminist Antihero in Marvel’s Jessica Jones.” In Jessica Jones, Scarred Superhero: Essays on Gender, Trauma, and Addiction in the Netflix Series, McFarland Press. 2018.

“Guess what I majored in. Hint, not the secretarial arts!”: Sexism, Heroism, and Morality in The CW’s Arrow and DC Comics’ Green Arrow,” Written with Katherine E. Whaley. In Arrow and Superhero Television: Essays on Themes and Characters of the Series, McFarland Press. 2017.

“‘We Have an Obligation to Imagine’ – Critical Reception of the Work of Neil Gaiman.” Written with Kyle Eveleth. Critical Insights: Neil Gaiman, Salem House. 2016.

“‘They Know It Could Happen To Anyone!’: The Promise Of Nuclear Holocaust And Vaccination Fallout In The Werewolf (1956).” Written with Zack Kruse. Horror Homeroom, no. 6, “Classic Horror.” 2022. https://tinyurl.com/HH6ZKJWwerewolf

“Ludocomics: Play and Interactivity in Comics, Games, and You Are Deadpool (2018)” Vault of Culture. 2021. https://www.vaultofculture.com/vault/feature/wigard/youaredeadpool

Understanding Genres in Comics by Nicholas Labarre. INKS: The Journal of the Comics Studies Society, 5(3), 2021.

Stephen King’s Modern Macabre: Essays on the Later Works. Eds. Patrick McAleer and Michael A. Perry. The Journal of the Fantastic in the Arts, 29.3. 2018.

Adventure Time & Philosophy. Ed. Nicolas Michaud. The Journal of the Fantastic in the Arts. 27.2. 2016